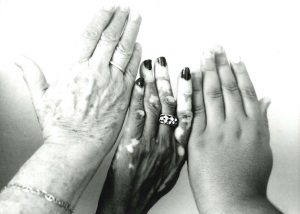 Vitiligo and Skin Damage
You might already know a lot about vitiligo. Vitiligo is however a complex disorder. No matter how much you know, there is always a lot to learn. The disease comes out differently in different people, and ongoing research is giving us an ever richer picture of what is truly going on. People who are familiar
with vitiligo know it from the white lesions of skin that appear on the hands, arms, face, and other areas. People tend to be very frustrated with white spots on especially face and hands. Today there are however famous models and celebrities who wear their vitiligo proudly, leading to more awareness than ever before. But when it comes to the root causes of this disease, many people are still unfamiliar with the details. In this article, we’ll go through some basic facts about things that may trigger vitiligo, so you can be more in the know about this particular disease.

Genetic predisposition
Some people don’t realize that vitiligo requires a genetic predisposition. Researchers have found more
than 50 genes that contribute to the disease. While vitiligo tends to run in families, having the genetic
makeup does not necessarily mean that the disease will break out. Studies of identical twins show that
only in a quarter of the cases does vitiligo break in the twin of a person struck by the disease. The
disease is evidently caused by a combination of triggers and a genetic predisposition. Stress in general
tends to trigger vitiligo. Here we are not speaking only about physical stresses but of mental stress as
well.

Stress as a trigger
In order to understand how stress triggers vitiligo, we need to look at the mechanisms causing the
disease. Vitiligo skin is characterized by the absence of cells that produce melanin, so called
melanocytes. Melanocytes typically disappear as the result of an immune response. The body has
somehow got it wrong, and thinks that pigment cells are intruders and do need to be taken out.
Diseases where the body attacks our own cells, are called autoimmune diseases. In reality vitiligo is an
autoimmune disease caused by so called T cells reacting to our melanocytes.

So how does stress cause this misunderstanding? To survive, living organisms have over millions of years
developed ways to take care of the body in times of stress. If you as an example scold your skin with hot
water, the cells immediately express heat shock proteins that scaffold the cells, so that they do not
collapse. Whenever a heat shock protein exits the cell, it may take with it a small part (a marker) from
the stressed melanocyte, and ignite your immune response, driving T Cells to kill cells having this
particular marker. This “request” starts the avalanche.

So two things are needed for vitiligo to accrue, a generic disposition, and a triggering stressful event.
What are some typical stress factors that cause vitiligo?

Wounds: When the skin is impacted by a wound, such as a puncture or a scratch, the resulting
response can sometimes cause vitiligo. Scarring and wounds cause the skin to be disrupted,
which opens the door for heat shock proteins to ask for the destruction of pigment cells.

Sunlight: Overexposure to the ultraviolet (UV) rays of sunlight is another potential trigger for
vitiligo. UV rays are dangerous for a number of reasons, including a link to skin cancer and other damage. Vitiligo is just one of the reasons to be careful if you experience repeated exposure to
the sun. To avoid any excess damage, it’s important to wear sunscreen with a potent SPF rating
whenever you know you’re going to spend a lot of time outside in the sun.

Chemicals: Certain chemicals have been known to cause damage to melanocytes. These
chemicals look like the material used to make pigment, and are converted into products that are
toxic to the pigment cells. When the pigment cells become damaged, it can trigger vitiligo
symptoms. Depending on whether or not you have the genetic predisposition for vitiligo, you
may be more likely to experience expanding depigmentation resulting from such chemical
exposure.

Emotional stress: One of the lesser-known causes of vitiligo is mental or emotional stress. Such
stress likewise causes a stress response in your cells. As our understanding of the disease
continues to evolve, medical experts are discovering that stress is linked to more symptoms
than previously thought. Stress or anxiety can cause yourbody to fire off immune responses causing or exacerbating vitiligo.

Understanding a disease like vitiligo is the first step to recognizing what you can do to prevent or treat
the disease. Avoiding these triggers whenever possible is key to reducing your risk. However, if you are
genetically predisposed to vitiligo, managing the disease may not always by that straight forward.
Fortunately, there are many treatment options with more in development. As awareness of vitiligo
continues to grow, people are becoming more accepting and less embarrassed about the skin splotches
that come with vitiligo. Still, it’s a good idea to avoid the triggers mentioned in this article, to reduce
your risk if possible.

Disclaimer: The information on this blog is intended for orientation purposes only. For medical treatment options please consult your dermatologist.